By Paul Bernert and Stephen Slivinski

One sign of a healthy local economy is how many new businesses are started each year. Strong growth in new businesses has been shown to correlate with increased household income and decreased unemployment.

Most cities see business startups of one type or another each year, but not every city sees as many as others. The number of startups is influenced heavily both by local economic conditions and the regulatory environment.

A large part of the Doing Business North America (DBNA) report measures that regulatory environment. Composed of six different categories, DBNA touches on several aspects of what it takes to start and run a business.

Business startup density — described here as the number of new businesses per square mile — is the measure than many researchers look at as an indicator of local economic growth potential. Using Census Bureau data that is part of the Business Dynamic Statistics series allows us to derive a measure of new business starts per square mile for the metropolitan statistical areas (MSAs) that are represented by specific cities in the DBNA report.

Such a measure of business starts per square mile has the additional benefit of implicitly adjusting for the relative size of a city. A larger city would be expected to have a larger number of business starts overall, but it’s also possible that — once adjusted to per-square-mile terms — it has a less robust business startup rate than a smaller city.

One category in the DBNA that might have the most potential to explain the differences between business startup density in various cities is is the Land and Space Use category. It measures:

Each of these land-use requirements can restrict the amount of land within a metro area that is available to house a new business or slow down the process of creating one. The resulting artificial land scarcity and excessive commercial building requirements can escalate the cost of a construction project and, consequently, drive up office rents of the companies in the finished building. Furthermore, a long drawn-out zoning process — which in many cities allows incumbent business owners hoping to restrict competition to have veto power over parts of the process — can create excessive potential points of rejection and ultimately have the effect of discouraging new business starts.

To see how the Land and Space use score might relate to business startup density, we first had to determine which cities that appear in the DBNA report were the best matches with those in the Census metropolitan statistical areas. (How the cities were chosen is discussed in the appendix.) The cities that made the list are twelve small- to medium-sized cities of between 100,00 and 2 million people. This has the advantage of keeping much larger metro areas that have substantially different attributes in regard to things like population density and the network effects that occur in large metropolitan areas from skewing the analysis.

In the DBNA report, high scores in the Land and Space Use category are awarded to those cities which have the fewest zoning restrictions, the lowest fees, the most efficient land transfer and deeding process, and the fewest number of board or commission reviews to approve zoning or re-zoning applications. The cities can be grouped by both higher-than-average scores and lower-than-average scores in this category.

As you can see in the chart below, the average number of business startups among the twelve cities studied was around 0.4 per square mile. The highest scoring cities saw an average of 0.57. The lowest scoring cities, however, were less than half that at 0.27. 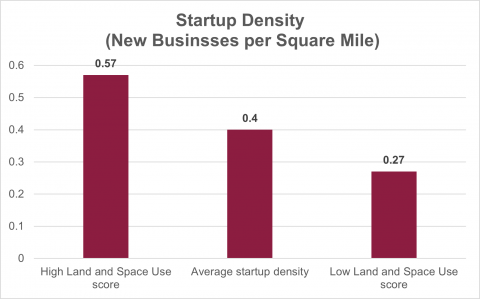 The results here are preliminary and more research is welcome. (Analysis by zip code instead of MSA would likely allow the inclusion of more cities in the analysis, for instance.) It’s also possible that there are other factors not included here that can further explain the differences in business start-up rates. However, based on this preliminary analysis, there is some non-trivial amount of difference between the startup rate in these small- and medium-sized cities and the number of zoning impediments that are put in the way of business creation by city governments might be a causal factor.

The Doing Business North America project measures business regulatory burdens in 130 cities over Canada, the United States, and Mexico. The regulations measured are those that are instituted and applied to businesses within, not outside, the city limits.

Business start data on U.S. cities only is supplied by the U.S. Census Bureau in their annual “Business Dynamic Statistics” (BDS) series are grouped by “metropolitan statistical area.” These tend to be much broader than individual cities because they can encompass several adjoining cities and sometimes even sections of other adjoining states. Furthermore, bigger cities tend to be in included in much larger MSAs than small- or medium-sized cities which tend to be either their own stand-alone “micropolitan” area or can be more appropriately representative of the MSA as a whole.

To determine which MSAs are best represented by the cities in the DBNA report, a number of filters were applied to the list of MSAs available in BDS series: 1.) Multi-state MSAs were excluded; and, 2.) MSAs in which less than 40% of the population resided in the DBNA city were excluded. That left a list of twelve city/MSA pairs for which the DBNA city was deemed representative. Land and Space Use scores for those cities ranged from 30.5 to 60.2.

The cities used in this analysis and the corresponding rates of business startup per square mile are listed in the table below.