Membership of Occupational Licensing Boards and the Barriers to Entry

In most states, who can sit on those boards are also a matter of state law. It’s no secret to observers of occupational licensing policy that a majority of licensing board members are usually incumbent license holders themselves - perhaps those with a stake in keeping the current regulatory structure intact and, as substantial empirical evidence has indicated over the past couple of decades, keeping out new competitors. In fact, board members can often influence the debate over policy reforms through state legislative testimony and behind-the-scenes lobbying efforts.

But some state laws require some portion of the voting-member seats on a licensing board to be filled by appointed members of the public who are not license-holders themselves and may not necessarily favor the existing regulatory structure - or may even see it as excessive. State legislatures have started pushing back against licensing boards they see as too aggressive in either enforcement or lobbying (or both) by adding more members of the public to licensing boards to serve as watchdogs or as a bulwark against overreach.

A recent example of this is legislation in Arizona signed into law by Governor Doug Ducey in June 2020. This new law both increases the number of public member seats and decreases the number of seats held by license holders for the boards of Barbering, Cosmetology, Funeral Directors and Embalmers, Technical Registration, and Massage Therapy.

Might allowing more public members encourage more equitable licensing requirements and greater entry by more people into a profession? Looking at how membership of licensing boards correlate to the barriers to entry can give us a bit of insight.

New data and analysis from the Center for the Study of Economic Liberty at Arizona State University - building upon a dataset initially created by Rebecca Allensworth of Vanderbilt University and a team of researchers there - can help us understand how the composition of the licensing boards in each state relate to occupational licensing burdens.

The focus in this Research Note is on the boards of cosmetology. This is generally a robust occupational category to focus on because it is licensed in all fifty states. However, there is quite a bit of variation in not only how many hours of training are required but also in the composition of the licensing board.

However, many of the ostensibly “public” members on other state boards could have a conflict of interest. The main conflict here is that some of these public members may be either the owner of a cosmetology school or an instructor at a school. Some states even require some number of the“public” members to be affiliated with a cosmetology school in one of those ways. Only 20 cosmetology boards have seats reserved in law for members of the public but not specifically reserved for school-affiliated members.

The qualifier “presumable” is still apt here too. Although some states do not require school-affiliated members to sit on the board, many of them also do not embed in state law a “no pecuniary interest” standard. This type of standard requires that the board member has no direct financial interest or stake in the licensing boards activities - such as pushing for higher training requirements because it would mean increased demand in the future for cosmetology school classes.

For the sake of analysis, this variance in the vote that the members with a pecuniary interest have on the licensing board makes it useful to assign a “dominance score” based on the degree of control the board members with a direct financial stake have. A score of 1 equals a simple majority - those states where incumbent license holders have the least clout, primarily because members of the public are almost evenly matched on the licensing boards and might have some ability to push back on policy changes. A score of 2 indicate a board supermajority of license-holder or school-affiliated seats (ranging from a 60% to 80% majority). Finally, a score of 3 equals supreme dominance - no public members on the board at all.

A reason to subdivide the boards based on this “dominance score” is to see if it the voting strength of license holders on a board also relates to the licensing requirements in a state. Greater dominance of a board by license holders might indicate a greater ability for that board to influence keeping the occupational entry status quo requirements or even providing political support for raising them.

To illustrate how this dominance score may relate to the level of licensing requirements, we can look to the Institute for Justice’s License to Work study. That study converts, for over 100 occupations, the time it takes for license applicants to complete the government-required training in each state into calendar days.

The chart below shows the correlation between dominance of a board by those with a pecuniary interest in keeping entry into an occupation costly and the cost in terms of calendar days spent on training. The states in which the incumbent license holders or school-affiliated members have the least dominance on licensing boards corresponds to licensing requirements that amount to around 340 days of training on average. The states that have the boards on which those with pecuniary interest have complete dominance require training amounting to an average of 435 days. That’s a difference of over 90 days. 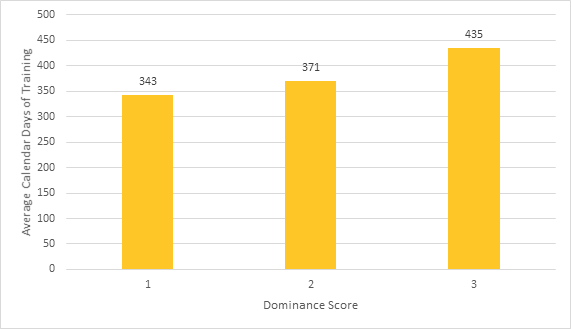 As a policy matter, reforms that mandate more public seats on licensing boards and that include “no pecuniary interest” rules may have a positive influence on the overall occupational licensing system. At the very least, it might minimize the one-sided nature of regulatory actions. Moving away from the “incumbent’s veto” is a healthy direction to travel.

Further research is needed to determine whether board membership influences licensing barriers or if it’s the other way around. Scholars at the Center for the Study of Economic Liberty will continue researching this issue further in the coming months and years. In the meantime, it does appear that board membership might have some sort of association - either directly or indirectly - on the average overall training requirements for entry into a profession.

Special thanks to Kate Shapovalenko for research assistance with this project.